The Tribute Business: Call it what it is 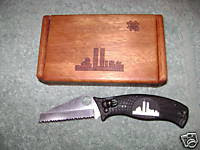 I don't plan to make this a regular occurrence, but I couldn't resist commenting on this recent item posted on eBay. Plus, this item is out of my price range and won't be joining my collection. I included the posting info below. The best intentions were behind many September 11th tribute and commemorative items. The eBay seller relates the story behind the knife's development and how 100% of the proceeds were donated to the NYC Police and Firefighters Widows and Children's Benefit Fund. But ultimately, what is the real reason for offering an item like this? One obvious reason is a marketing opportunity. I don't say this in a negative way. We live in a consumer-driven society where material goods define who we are (and how we remember). This knife clearly has special significance. But it is also this special quality that will demand a higher bid (as the seller relates below). Companies can't escape why they exist, no matter what they say their intentions are. They exist to make money, and these objects were created to make money. Whether a portion or all proceeds were donated, does it matter? The motive is still the same. And people bought these objects realizing this was a transaction. Their purchase helped support something (ie. made them feel good about it) and the object served as a connection and a way to remember to September 11th. Consumers and businesses together played this exchange out with a wink and nod. A win-win for everyone.
EBAY LISTING:
You are bidding on limited edition knife. This is Spyderco World Trade Center ( WTC) Collectible Knife. The insert in the center of the knife was made from actual steel beams recovered at the WTC. This knife 1252 / 2819. Through collaboration between company founder Sal Glesser and a group of firefighters and first responders in the New York City area, Spyderco designed a special folder to commemorate their service. The company offered a limited number of special folders that honor the men and women who fell in New York City on that day none of us should ever forget.
Basically, the folder is a special Rescue model with a CPM S30V steel sheepsfoot blade. This model was also chosen to debut the company’s new ball bearing lock, which is such an interesting concept that it really deserves a separate article. The knife is marked with a serial number from 1-2819, to commemorate all those who died in the towers that day. The WTC Rescue by itself would be a beautiful and handy folder for any first responder’s kit, but it boasts at least a couple of other special features.
The WTC Rescue is supplied with a tasteful wooden presentation box . One hundred percent of the profits from these knives when originally sold were donated to the New York City Police and Firefighters Widows and Children’s Benefit Fund.
Over the years, I have seen about six of the 2,819 knives up for auction. The last one sold for over $650.00 . This is as new in the box, never carried, never sharpened, the recent economy dictates its sale.
Paypal accepted +3%, or Postal MO. Shipped same day as payment recieved. Shipped USPS, with tracking sent to buyer. Shipping in CONUS add $12.00
Buy It now: and I will pay for the shipping, insurance, and tracking.
September 11, 2001: Never Forget.
Posted by Leatherstocking Baseball League at 6:12 PM 1 comment:

Making Sense of the Middle East? 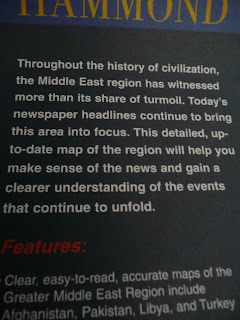 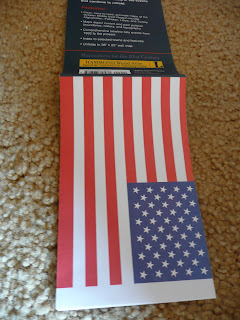 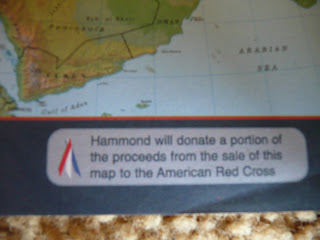 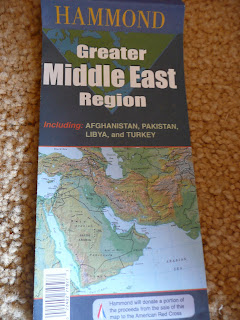 Decades from now, someone will pick up this Hammond map of the Middle East and will clearly be able to see how it reflects the events of the time period (in this case, September 11th). Will they wonder why a map of the Middle East carries a message referencing the turmoil of the Middle East and today's headlines? Will they wonder why there is an American flag emblazoned on one of the map's folding pages? This map demonstrates that all forms of material culture, even a paper map of the Middle East, was impacted/influenced by 9/11. It would be great to hear about the process and reasons for why Hammond created this particular map. Obviously a map is an educational tool, and they saw an opportunity to meet the demand for people to better understand where countries like Saudi Arabia were located. But, to incorporate an American flag? Would someone question the Hammond company's patriotism for making a map of the Middle East? This flag is a marketing statement to consumers: we are patriotic (and don't forget, buying our map also helps the Red Cross). Of course, this is only one perspective, but you can see how this map would spur a great conversation in any classroom.
Posted by Leatherstocking Baseball League at 10:27 AM No comments: 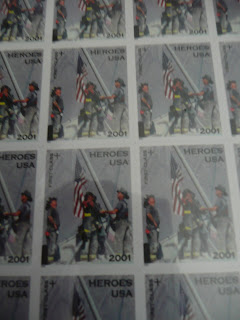 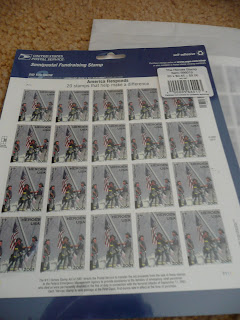 This September 11th stamp tribute was offered by the US Postal Service. The extra proceeds from the sale of these stamps was to go to FEMA to help with those impacted by the event. The USPS has become quite active in marketing specialized stamps, and this tribute is labeled a semipostal fundraising stamp.
Posted by Leatherstocking Baseball League at 7:09 PM No comments: 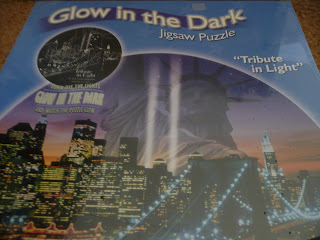 This puzzle features the "tribute in light" that was created in memory of the Twin Towers. The puzzle emphasizes its glow in the dark feature. Puzzles feature a number of tribute images to September 11th. It strikes me as odd to have a puzzle feature such images. Puzzles are a family activity, and it is hard to imagine a family sitting at the table assembling this glow in the dark tribute. Or maybe some would argue it makes sense.
Posted by Leatherstocking Baseball League at 6:44 PM No comments: